Earthworker History: The 1970s Struggle to Save the Vic Market

Remembering the struggle to save the Vic Market from the threat of redevelopment in the 1970s. Earthworker recognises itself as part of this tradition of defending public and community space.

The Vic Market is a vital public space in the heart of Melbourne. Many of us who live in and around Melbourne appreciate the Market as a place to work, eat, meet and enjoy company with friends and family.

Not many know that in the 1970s, pressure began to mount for the “redevelopment” of the Queen Victoria Market into a combined trade and hotel precinct. Even fewer know the truth about the role that a militant trade union, namely the Builders Labourers’ Federation (BLF), played in protecting the Vic Market from this threat. 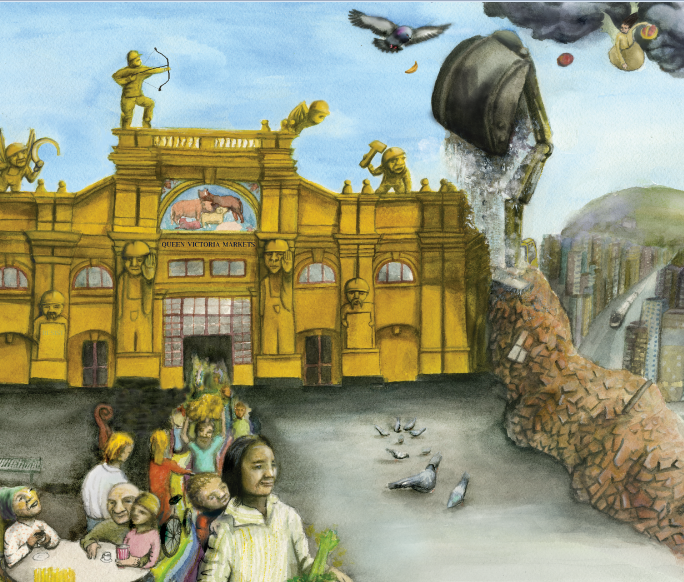 This is an excerpt from Vic Market’s own website: “The separation of the Wholesale Market from the Retail Market lead to a plan to redevelop the Queen Victoria Market site into a trade centre, office and hotel complex in the 1970s. However, public outcry prevented this and resulted in the Market being classified by the National Trust. Later, the Market site and its buildings were listed on the Historic Buildings Register.”

Not a word about a union. Yet if you talk to the older stall holders today they all know people who came before them who were involved in that period, and who are proud of the union-declared ban on development work at the Vic market. This action was only one in a series of bans that the BLF put on development sites that were deemed socially or environmentally harmful. This strategy was collectively termed “Green Bans”.

Here’s some words from Dave Kerin, co-founder of Earthworker and one of those involved in the victory to protect the Vic Market in the 1970s:

“Our community is there; our kids grew up with the Market as a formative community influence; and importantly thanks to John Cummins (previous Victorian secretary of the BLF), the Green Ban remains on the Vic Market. In the early 1990’s the stall holders approached Cummo to discuss yet another proposal to build inappropriately on Market land. Cummo reassured everybody that as far as he was concerned “The Green Ban was never lifted!” The Green Ban still holds and yet goes unacknowledged by the Market’s Administration. This ahistorical presentation of events must change.”

History is repeating, and we now see that the Vic Market is under threat again. But, if we know our history, we can assert with confidence “We’ve saved it before, we’ll save it again!”.

To stay up to date on the current campaign to save the Victoria Market from redevelopment, go to https://www.facebook.com/SaveVicMarket/