Over a weekend late in January 2018, around 30 Earthworker organisers, along with members of Earthworker Energy Manufacturing Cooperative and Redgum Cleaning Cooperative, attended a training weekend at an ecovillage in Moe, Victoria. Below is a report back from Mark, an Earthworker Organiser, about the weekend.

The quote above captures the spirit of the Earthworker project well. While we are indeed grounded in economic outcomes, we do not forget the ultimate goal of our work; finding better ways to be in the world, and with each other. The training weekend gave us another glimpse of what we are working for, from the way we worked together in cooperation and dignity, to the reminders offered by the birdsong and bush that we are connected to our habitat. It was a time to remember where we have come from, where we are, and where we are going. 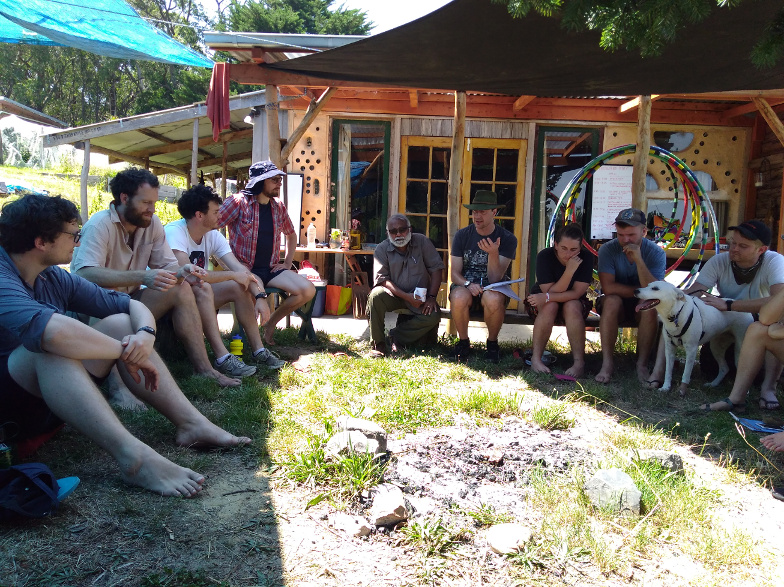 Earthworkers put their heads together at summer training camp

We were provided with a glimpse of where we come from by Earthworker elders Dave Kerin and John Cleary. Both were involved in the Green Bans of the Builders Labourers’ Federation, and gave younger Earthworkers a sense of the spiritual roots of the project, covering victory and defeats since the time of protests against the Vietnam War.

We only had to look around to get a sense of where we are now. So many committed organisers and worker-owners cooperating together, breaking bread and sharing stories. The place also held us all wonderfully. We were graciously hosted by Wurruk’an, an ecovillage in Moe surrounded by bush. As we stumbled bleary eyed after hours of workshops, we were greeted by the calls of magpies, and various delicious feasts prepared by the Wurruk’an kitchen crew.

The final day saw us continue to “build the road as we travel”. We gathered in a circle as we strategised the coming year. It was a chance to take a clear-eyed look at where we are standing, and start to map out the next steps, from kicking off production at the Earthworker Energy factory, to maintaining engagement with our membership base. People put their hands up to take on tasks, knowing that we are the ones that will make this happen.

People at the camp ranged from over 10 years in the project, to it being their first Earthworker event. There were local Morwellians, some who previously worked in the coal industry, as well as Melbournians, others from regional Vic, trade unionists, environmentalists, and people from different faith backgrounds. As always, I was humbled to see such a diverse, mongrel mob of people work so respectfully and diligently together.